Another Blue Jays season has come and gone. Once again, I got fan passes for seating in the 500 level. The cost was the same, $99, as the “Toronto Star Season Pass” did last year and you could still attend 80 games (all except the home opener). What changed this year was that instead of heading down to the ballpark at least early and standing in line, you had assigned seats associated with each pass. I called in relatively early on the day I got the email announcing the passes and managed to get passes for section 515 (right field side) in row 7. There were a few pass holders in row 6, and half of my row was pass holders. Most of the section behind my seats were pass holders also. A section on the left field side was also filled with pass holders, so there were options to suit one’s preferred view. 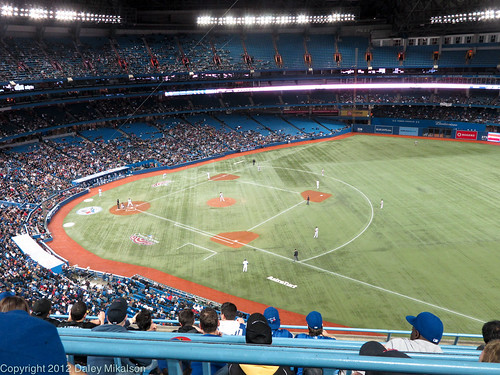 View from my seats

Last year, I took in 15 games and saw 11 different teams (see last year’s post). This year, I took in 30 games with 16 different opponent. This means that each game cost $3.30. I think Heather went to 28. I would almost always make sandwiches and chop up some veggies for lunch/dinner. On the rare occasion, Heather or I would pick up a sub or bag of cheezies for the game. Being permitted to bring in your own food is a great feature of going to baseball games over other sports.