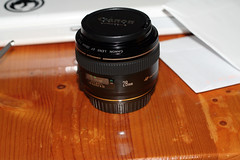 
I finally got my new lens in the mail the other day. I'm sure it would have been faster with "commercial shipping" rather than postal but with postal I pay tax plus $5 instead of tax plus whatever fee they want to charge this time usually much more than even tax.

Anyway, I really like the lens. I have had it out in the cold (-13) and it has been fine. I has a fast auto-focus and as an added bonus has full-time manual focus... meaning I can always re-focus an auto-focus if it isn't what I actually want focussed on. I got a hood for it because I was trying to get the same parts as would come with the similar Sigma 28mm and 30mm lenses.

I chose the Canon because of much better reviews than either of the others and the higher perceived quality of build. Thus far, it has not disappointed. I have not posted many photos with it yet, but have a camera with a growing set that will be up soon.

After using this lens for a month I can say that it is great. I find it much more versatile than the 50mm f/1.8. I think this is partially because more of the image is in-focus and the full-time manual is great when the fast auto-focus fails to find what you wanted. The auto-focus is very accurate in dark conditions.

If you want this lens and you are in Canada, I would suggest you take a look at photoprice.ca [direct link to lens] where they will tell you the current cheapest online ordering option including shipping and applicable taxes. Thanks to the fluctuation in the Canadian dollar it might save you quite a bit.