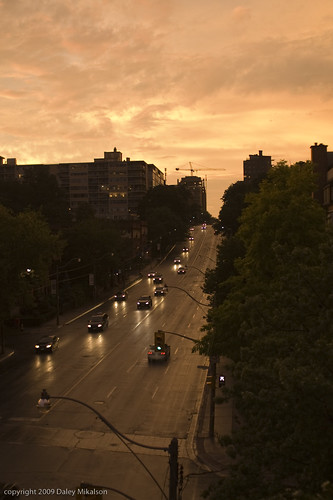 Just after I posted last, there was a rather large storm through Southern Ontario and this photo is the sunset after the storm had passed. 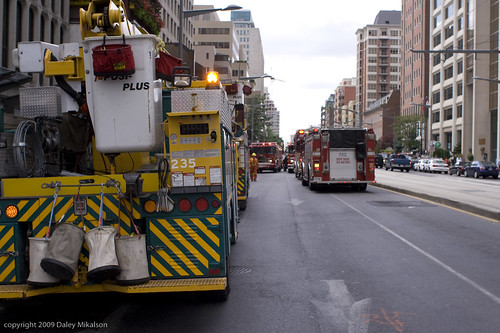 There was some sort of fire behind a building on St. Clair Ave West. It was a 2 alarm fire, though I couldn't see much from where I got to. This is a bit more than an hour after the incident started. 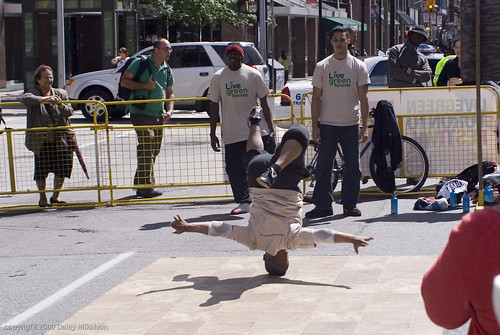 Yesterday, Heather and I walked down to Dundas Square to see a green expo thing. Lots of city booths and then various vendors of bamboo products, solar panels, and glass bottles. At Yonge and Queen there were these break dancers. They were fun to watch. We walked to Church and Queen to look at the track reconstruction in the intersection.

After this, we bought Snow Leopard and Heather got me an Xbox 360. We cloned both our hard drives before installing and so everything seems to have installed as it should. Heather's computer acted a bit strange but is over it now, and mine went through like a charm and I reclaimed about 5 GB of hard drive space in the process. I'm happy that all my programs still work, except Parallels but I don't use it much now that I have windows installed.

The xbox is lots of fun. I have been playing Call of Duty: World at War. The system came with Halo3 but I haven't even opened it yet. Thanks to Heather for the lovely gift.

I have a week and a half left before my classes start. The time is both not going fast enough and disappearing too quickly. It really depends on what I'm doing at the moment. Right now it is time for lunch, then I'm off to package a painting.