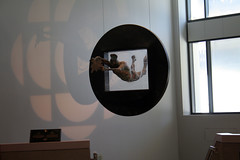 This is one of the installations at the CBC building. It is really cool. We couldn't figure out where the CBC logo was being projected from but then again we didn't look that hard.

This was after we saw GO! Thankfully, in the morning the trains were still running on time. Though too bad we didn't take the train through Lower Bay in the morning when the subway was still working. Oh well, I'm sure I can see it eventually.