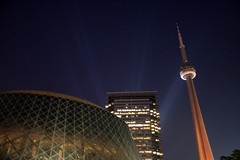 After the play we went walking around downtown. In this picture you can see Roy Thomson Hall on the left, the CN tower on the right and the lights behind that building are from a light exhibition for the Luminato festival. We did walk down to Queen's Quay where the lights were and it was really neat. (You can find more pictures of that on my Flickr page)

On the way there we found a free concert. We saw the end of a set by Molly Johnson and the very start of Chantal Kreviazuk. The past two weekends there have seemed to be so many more people downtown that usual. But I guess it is getting warm and last weekend was doors open and this weekend is the start of Luminato.

Other than those things I have mostly been working and watching hockey and soccer on tv. I got an HDTV tuner for over the air. So that means I get real HD without having to pay for cable. And the channels that I have set up at the moment look really good. Hockey looks so much more amazing. With HD if you have enough signal to lock on to the channel the picture is completely clear. It makes the "peasant vision" experience better than cable if you only really watch the basic channels anyway. Hopefully with my new antenna I will be able to pick up the Buffalo station including PBS because that would just make the HD better.