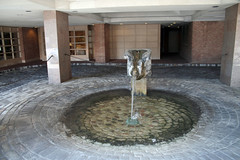 After seeing CBC Radio One's Go! on Saturday morning, we headed off to the St. Lawrence Market to get some veggies. I hate the people at the market because they don't know how to walk or not block aisles. Why doesn't our group of 5 people stand shoulder to shoulder across the aisle and stop so that everybody behind us has to wait. But the food is good. There were fresh Ontario strawberries, some peppers and sweet potatoes.

Later, we walked up Jarvis to Dundas and over up Yonge for some pizza then home. We had picked up Stranger than Fiction and Night at the Museum (previously viewed) in our travels and watched the second one. Funny movie. We didn't really do anything for the rest of the day. Mostly lounging around.