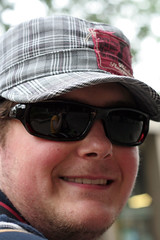 
I got a new hat. I guess that isn't really news but that's ok, I like it. Have been hanging out at watching soccer most of the last month. Apart from that mostly wandering around the city.

Lots of time around the Harbourfront Centre. There are different shows there every week. This week is global hip hop. If it isn't crazy busy we will go see Wyclef Jean tonight. (Hopefully, no rain.)

The cats are being cat like. Creamsicle is growing quickly and though she still eats beside my computer and looks small there she is actually quite long. Nessa seems to like us better now. She has come and laid on the couch arm while we were watching TV.