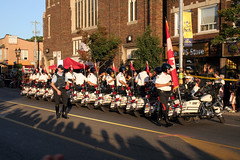 
As we were walking back towards the downtown end of Danforth Avenue, we came across a large crowd around an open area. So we stopped and watched a really cool police motorcycle show. It was precision riding. They were weaving around each other, riding extremely slowly side by side and one speeding towards a row of others two by two and splitting them like a zipper. It was really neat, I have more photos on flickr and all those ones are in motion, whether they look like it or not.