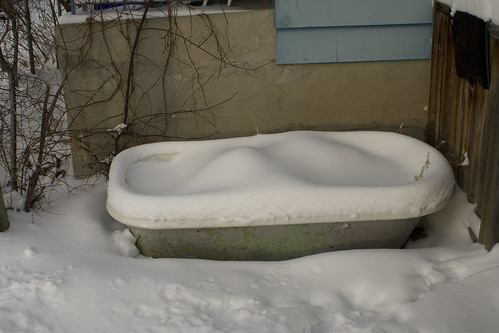 It was still cold out today. But after taking a few photos, I cleared the top of the driveway of ice. It was really thick and now my thumb hurts from the ice chipper, but I think it was worth it. I like being able to use the driveway without sliding down it. Hopefully when it eventually gets warm it won't be so slippery without all the meltable stuff at the top.

Apart from that I really didn't do anything productive today. I have to get up and work tomorrow, but that will be nice. I won't feel like I wasted the day doing nothing.

Only a week until I'm in Toronto. With any luck there won't be piles of snow as large as here. There would really have to be a couple huge dumps for that to happen and I don't think that the residents would accept that so I'm glad it isn't going to happen.