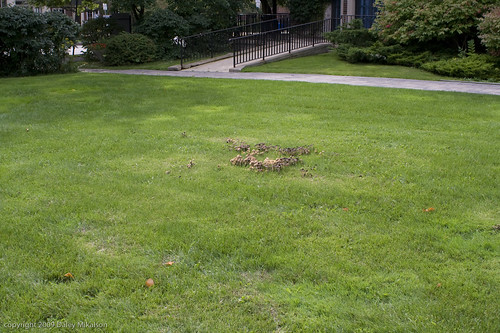 It was an action packed weekend. Saturday, we went up to Eglinton to pick me out some new glasses. The pair I have been wearing before bed and other infrequent times are very old. I know I have had the lenses replaced at least once and the frames are, I believe, form before I started wearing contacts. Anyway, I picked out some moderner ones, which I should get by the weekend. Just in time to sport them for Nuit Blanche. Heather's computer needed fixing again. This time it was the speaker cable that had become unseated. I suspect when the DC board was replaced they didn't clip the cable in correctly and over the past few months it has slowly manoeuvred its way out of place to stop the right speaker from functioning.

We also had a tasty dinner at Crown & Dragon, which is just north of Davenport/Church and Yonge on the west side. They also have a large selection of really good wings. It was fairly empty when we arrived and the Leafs game was just about to start. There were about 5 people around the bar watching the game and a few other tables. As we were getting ready to leave a large group was forming at an adjacent table, but we couldn't figure out why they were meeting. None of them seemed to know anybody else until the last person arrived who about 3 of the 10 or 11 seemed to know. Anyway, it was a nice place to eat and they even put the main event on the overhead speakers but it isn't too loud.

On Sunday, Word on the Street was happening on Queen's Park Circle. There seem to be more and more people at these events each year and they seem less and less interested in the event. I think many of them attend just to say that they did. I ran into somebody who used to work at Arup with me. After Heather found everything she wanted, we went off to the university so I could show her my "office". Really it is a cubicle/large study carrel in a room with 7 other desks. There aren't usually that many people in the office and even when there are I hardly notice. The office even has windows, which many other grad offices don't have. 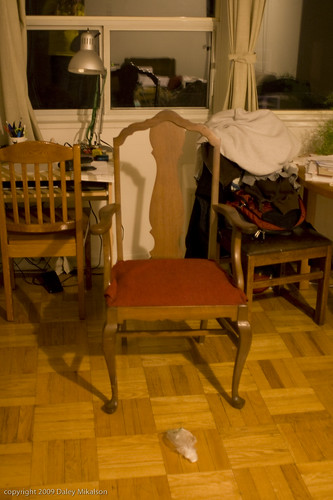 My new chair c/o of my grandma, who is moving and doesn't have space for it anymore (she says, I think she would but I will gladly accept a very nice chair). I think I will fix the seat because the padding is a bit flattened from years of use. Apart from that it is a very nice chair.

Tomorrow, we are off to see Jerry Springer - The Opera. The Hart House theatre is putting it on again after success last year, and I can't wait. I was disappointed last year when I wasn't in Toronto during its run.