Another Sunday and another bike ride

With a forecast of 31 we got up fairly early for a Sunday and adjusted Heather's new bike seat before heading off for a ride to the Distillery District. On the way, part of the clasp for Heather's bike fender fell off, so it was a noisy ride along Parliament, which is by no stretch of the imagination a smooth road. At the Distillery we went in a couple of buildings for Doors Open and had a chocolate fudge brownie. 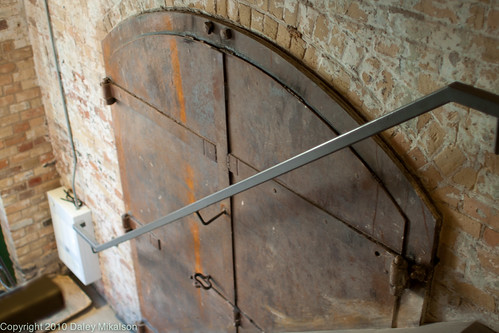 This door was in a new stairwell in the first building we went in (#61). Obviously, not used anymore. 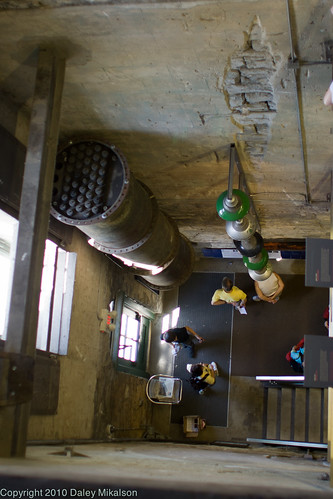 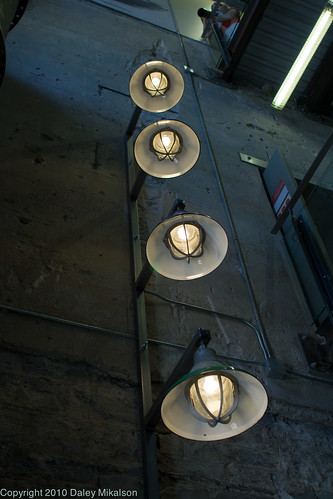 Finally, a closer look at the lights, which are visible along the gallery wall.

After finishing up the Distillery District, we headed North to a bike shop to see if they could fix the broken fender clasp. We stopped at one shop but they were quite busy fixing flats. Before arriving at the second shop we did a quick stop in my office building to fill the water bottle and find out that my id card really can open the door on Sundays.

At the Bike Joint, on Harbord Street, the ladies working looked through their bench and found a bracket that fit on the fender. Heather, also, got her own lock so it would be easier to lock up while out on adventures. The service there has always been good in my experience and I would recommend it if you need bike repairs or some advice.

It has been a good weekend. Last night, we dined at Mitzi's Sister. It was a slow trip on the streetcar as there were inexplicable bottlenecks along Queen, but the food and service were good. Have to go back again to try more of the food.

Book: Into the Hurricane: Attacking Socialism and the CCF - John Boyko