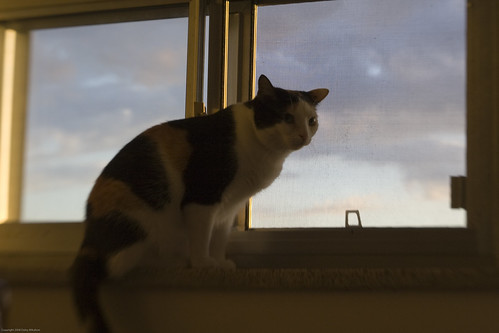 Creamsicle on the sill, originally uploaded by dalmond.

Well I guess a week has passed. Didn't get up to much this past week. That isn't really true. On Tuesday, there was a Toronto FC game against Independiente and TFC lost, but it was a very good game. Hopefully, they will take the good play to this coming Tuesday against Montreal.

Thursday, Heather and her friend made dips for dinner, and we played board games.

Friday night was very warm and we went to Ikea. There were many parts of the store being renovated, so that was a bit disappointing. However, we did find some things and stopped one subway stop earlier than Ikea tells us to because it seems closer. (I checked on GoogleEarth and it is in fact 100m from the stop we got off at rather than the one Ikea says.)

It looked like it would rain on Saturday morning and so we went out for a quick mapping of Leaside (Laird and Eglinton). Mostly to get the names of the streets and to check on some uncertain areas of the map. It only rained on us a little while we were out there. In the afternoon, it was a TFC match, which they tied. And in the evening, we watched the South Park movie, MadTV and SNL.

Today, we went up to Heather's parents' so we could get a vehicle to return a mattress and go to Bulk Barn. That's is about all for the week.