Setting up a coalition... 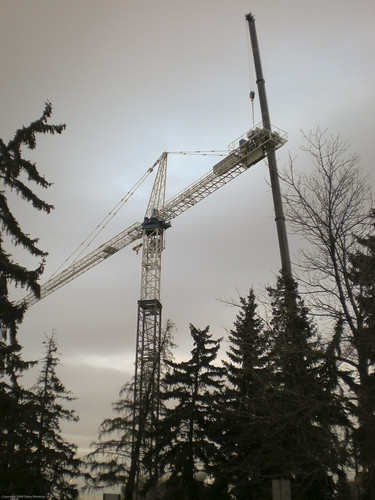 Setting up a crane, originally uploaded by dalmond.

I have almost, almost arrived at the end of the semester. Just 3 more days... well 9.5 hours... of classes left then 4 finals.

It has been trying to be cold, but I don't think it is really succeeding. It has also tried to snow, but hasn't been all that good at that either. However, ice has been quite good at propagating along my route to the bus stop. Everyday it seems like I slip over a larger section of the route.

This photo is of the last crane being put up at the EEEL site. They have, thankfully, put the sidewalk back in along the East side of Campus Drive up to ICT. It was quite annoying having to either cross or walk on the road. Usually, most people walked on the street and just took away a lane of traffic, which didn't seem like the optimal solution.

On to other topics... Briefly I will mention that either PM Harper has to go and another from his party replace him (Jim Prentice anyone?). Ideally, somebody who is less of an ideologue and is more willing to "play" with others. Or the coalition should be put in place. Either way it has to be done now, not in two months because, given Harper's economic statement tone, there will be more antics like that which the opposition will... well... oppose and the government will fall on the budget. That's enough of that.

In a sort of related field, I find it distressing that there is so little acknowledgment of the situation at the university–outside of political clubs. All I see are the random group joinings on facebook, which may show political bent, but do little to change anything. Frankly, I don't care if you are a super communist or an uber-conservative, but at least justify your position with substance, not vacuous rhetoric.