This afternoon there was a small car crash on Avenue at the bottom of the hill from St. Clair. A taxi's front got crunched from hitting an SUV rear and there was another car but I didn't understand why it was there. This post is about poor driver decisions in relation to emergency workers on the road. Maybe I will tell my story in photos. Bottom line is that if you have the option you should not be driving in the lane where the fire fighters, EMS, police are working.

So we start with the crash. 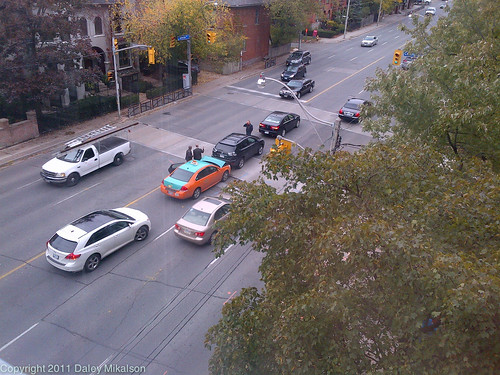 You can see the airport taxi driver thinks it is alright to drive in the middle southbound lane even though there are people standing on the edge of it and they had been since he was quite far in the hill.

Next, we have Toronto Fire arrive. (I'm not sure their protocol for placing their vehicles, but if I wrote it they would park centred on the yellow line. By doing so they give themselves half a lane on either side where other vehicles shouldn't be driving at a minimum.) 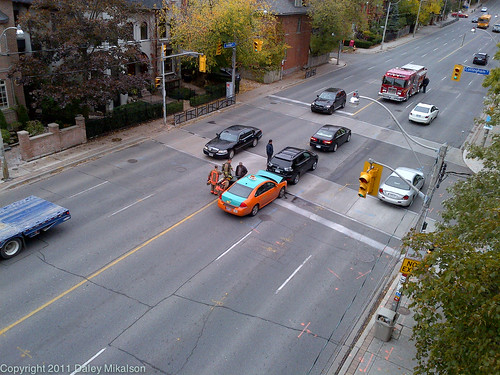 Despite three fire fighters in their reflective outfits being in the lane and a fire truck with flashing lights before the intersection, the SUV in the photo still waits until the last possible moment to change lanes. Oh also there are no other cars blocking the SUV from changing lanes all the way down the hill. The other two in the photo were always far enough in front to not be a hazard.

I don't think this police car was sent to the accident and just was passing by. 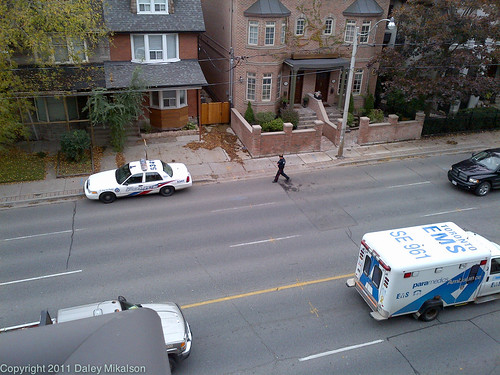 He left in fairly short order after talking to the fire fighters. Though his parking job left something to be desired. He only had yellow lights flashing. And those lights would have been more useful if he had set them as directional lights indicating to go to the cars left instead of just flashing yellow.

By this time EMS and 3 tow trucks have arrived and are lined up in the lane behind the cars. Fire has placed cones on the adjacent lane northbound so they could clean up the fluids coming from the taxi. While placing the cones, the fire fighter was honked at by a van who thought he should've let the van through in that lane before putting down the cones.

This is a typical shot of what went on while EMS and Fire talked to the passengers in the taxi and got them out. 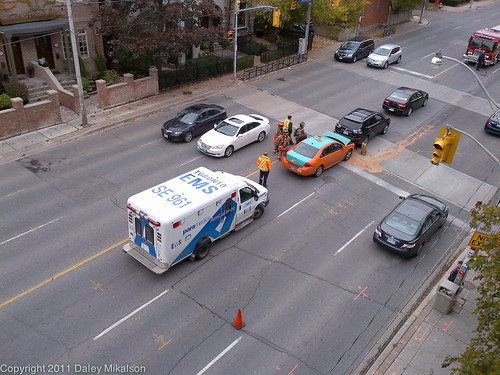 Notice the two cars both straddling the lane lines. Both changing lanes at the last possible second despite the two empty lanes safely away from the centre lane where people were standing.

After the ambulance left with the taxi passengers, the fire fighters moved to the other side. The vehicles coming down the hill can still see a fire truck in the centre lane of the road with lights flashing and yet they still choose the middle lane as their thoroughfare. 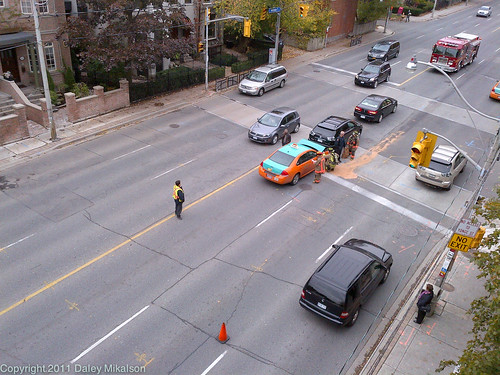 Overall, I think those continuing to drive in the middle lane are poor drivers who either are ignorant of the situation in the lane beside them or are over-confident in their ability to do anything that is necessary to avoid a disaster at the last second.

So another police car came about 2.5 hours after the crash and he investigated. 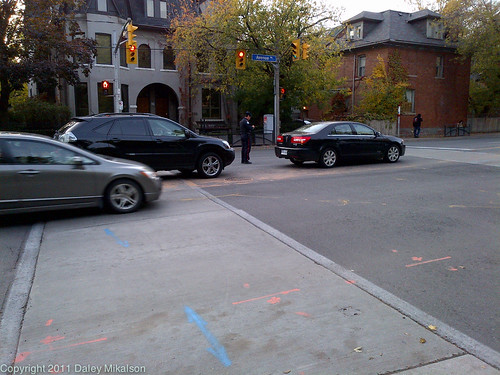 And at 5:40 pm the crash was cleared from the intersection and moved around the corner. I'm not sure why the first police officer didn't investigate or why it took so long for another to arrive. The fire truck sat there with 4 fire fighters for almost 3 hours. They had work to do on the site for about half an hour of that time, but they were presumably unsure what would be left under the vehicles once they were moved. 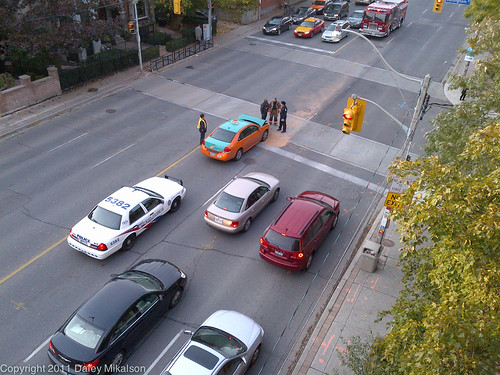