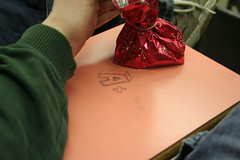 A+
Originally uploaded by dalmond.

This probably won't happen in Project Management after the final today. It went mostly well, except for one long question worth quite a bit. It was worth 20% of the exam. The prof said after that there was a trick in it. You had to multiply all the numbers in part of it by 10 just because they weren't large enough. Now, I'm not sure how it works in other faculties but this strikes me and many others in the class as unfair because we weren't allowed to ask any questions during the exam. (Actually that isn't true I know how it works in other faculties and it isn't underhanded like that.)

After I know what I got on the exam, which should be tonight, I am thinking I might actually appeal the exam because it's just unreasonable to expect us to know that we should multiply a whole section by 10 get the correct answer. Shouldn't he have to proof read his exam? And shouldn't what it says on the page be the question? Unless, it is announced in all writing rooms that something has been changed?

I will have to look into it. Anyway, the prof [edited].