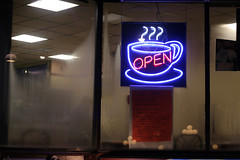 It was "freezing cold" Monday on the way home... at least that is how the news people presented it. I had an enjoyable walk home. I even undid my jacket partway home because I was too warm. I mean it was only -3 or -4.

I was going to post a rant about the parallel universe that is Toronto/Ontario but Rick Mercer beat me to it on his show yesterday (Tuesday) so you should just watch "The Rant" because that is how I feel. People think they are going to freeze when the temperature drops to like 5 degrees and it gets worse as the temperature drops below zero. You'd think these people lived in the Caribbean the rest of the year, but I distinctly remember seeing them last week and last month and in the summer in Toronto not warmer climes.

Also, today while Heather and I were on the bus coming home from Loblaws, a Hanukkah parade went by. It was a long line of vans and campers with menorah on their roofs going the other way. It was the longest such parade I have ever seen... also the first. It was neat and odd at the same time.