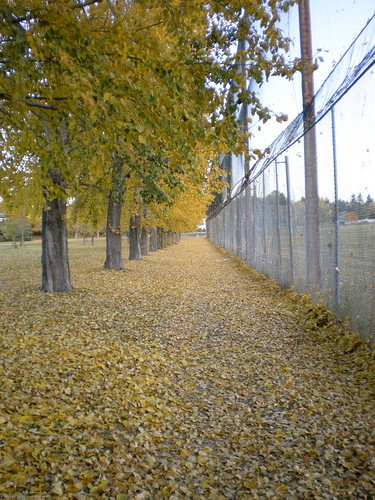 Took a walk home from work today since I didn't have anywhere to be. I had my Nikon Coolpix L14 with me. It isn't a great camera in much less than full light, unless you are making a stop-motion movie (it has this feature). I got this shot as I passed the driving range at the Confederation Golf Course.

I had a bit of a bothersome week. In the process of applying for a NSERC scholarship:
1) thought my UofA transcripts wouldn't arrive in time (they did to the university but not to me, still)
2) wouldn't get my second recommendation letter in time (it was in the morning after the deadline, but they thankfully accepted it since nobody could find the prof)
3) decided it was a waste of time because I came up with an interesting research proposal that on first glance seemed, if not impossible, improbable. Later, I came up with a better one with a bit of help from a prof I want to work with.

So that was quite a bit for one week. Oh also I had a term test in Hydrology that I thought went well and then wondered if it did after talking to my group for another project. They all thought it was terrible and that it wasn't on the topics we were told it was. I do remember the prof saying "you are responsible for all sections up to 1.10, except 1.4.1 and 1.4.2". So I really am not sure what they were talking about. The only thing I am certain i did wrong was drop a 2 from the statement that 95% of a normal distribution fell within the mean ± one (oops) standard deviation. Oh well.

I have a busy weekend working Saturday until 5.30 and then Sunday doing to my dad's cabin to move a counter in. But next Friday, I'm going to Toronto for the weekend to see Heather.