A bit further along... Almost done 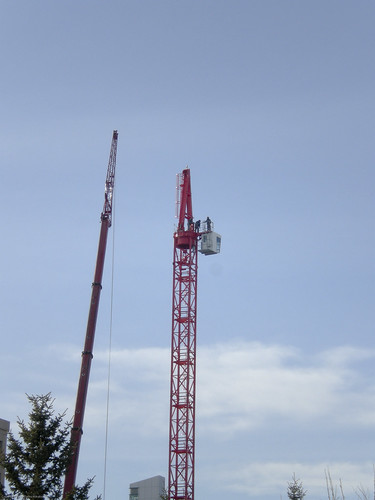 A bit further along, originally uploaded by dalmond.

I had a busy weekend of doing actual school work. It wasn't as fun as it may sound nor as glamorous. I had to do work for 3/5 courses and ideally some for one more, but I gave up on doing more work and just did what I thought was necessary.

On Friday, I got a friendly e-mail from the university telling me that I had received a UofC Merit Award. It is excellent since I will pay more than half my tuition for next semester. (Just remembered that I had to write a thank you letter to them.)

The photo is of a crane erection at the EEEL site at Campus Drive and 32nd Avenue. They are putting up another next Friday right on the corner of those streets. This one is actually across Campus Drive from Earth Science.

There are mercifully only two weeks left in this semester. I have grown tired of a couple classes. One of my courses, hydrology, I wouldn't mind if it went on and on as it is significantly more interesting to me than a couple others. I guess this is good since that is basically what I said I was interested in when I submitted my applications to McMaster and UofT for grad school. I would love to find out about that soon, but I'm assured that it won't be for a while that I know anything. At least, I will know what happens about NSERC near the start of February.

I must study for Hydrology this week and do some other stuff... perhaps study for more than one course so that I'm super smart when finals come in 2.5 weeks. Especially so, considering that I will be working many hours over exams because so many people are gone early and I am here until the office closes. (Yay $).