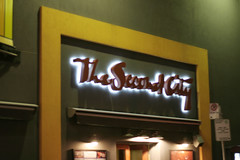 Heather's brother took us to see the new Second City show, Facebook of Revelations. It was quite funny. Her brother even participated in the show as a "caller" on one of the sketches. It was really funny. They explained how to fix a growth on your toe using "Smokey and the Bandit". Hilarious show.

Tonight we watched the final episode of "Second City's Next Comedy Legend". It has been one of the better reality shows I have actually watched. Very funny and mostly not painful to watch. The final 3 were all really funny.