A bit of reflection 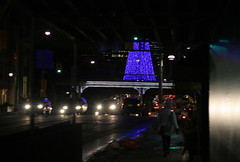 A bit of reflection
Originally uploaded by dalmond


This is under the scaffolding just South of the Summerhill LCBO. The building has been undergoing restoration since the middle of the summer. The blue tree is on the CPR tracks.

In other news, I bought a new camera lens today (Canon 28mm f/1.8). I hope it comes sooner rather than later but with the Christmas package season and the spill-over from the high dollar, it might still take a while. Hopefully, it will be great. I like my 50mm f/1.8 but sometimes it is just to close in. So, I will try the 45mm equivalent. I spend lots of time around there on my kit lens but it just doesn't get enough light for those evening and night shots that I love taking so much.

I had a review at work yesterday, and it went very well. And today I moved desks so that we don't have to walk around the set of cubicles so much since there was previous one of use on each side. Now we are on the same side.

Anybody coming out east over Christmas? Drop me an e-mail.