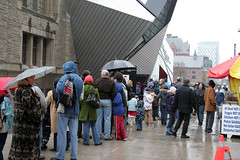 
Trying to exercise our new ROM memberships, we encountered this long line. We thought it was people waiting to get in to see the newly installed dinosaur. We gave up and went to the mall.

Later, in the afternoon we came back but there was still a line just a long but a bit less dense. Off to the camera store we went and then a kitchen store. And we came home.

Then out again to get new shoes. Heather and I both got a new pair of Keen shoes. They are really comfortable. The girl helping Heather in the store compared them to Birkenstocks, which was almost enough to sell them. Putting them on sold them.

It has been a good few days and still a few more days of holiday/vacation left.