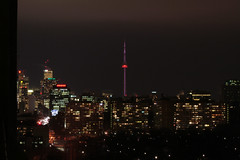 
I was playing a bit more with my GorillaPod SLR. If I put the exposure longer than 2 seconds I can use my 75-300mm lens and the shake from when I release the shutter doesn't affect the photo. The lens might be a bit heavy for the SLR version. It probably would call for the next model up, but I don't use that lens very often. It is heavy to carry when I rarely change lenses anymore. Since I got it, the 28mm has been attached, almost exclusively. Before that it was most often the 50mm and some outings I would use the kit lens.