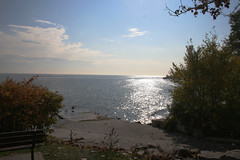 
This was taken on a long walk Heather and I took this afternoon. I wanted to go to the end of the Long branch streetcar but saw some nice houses before we got to the end. We ended up at Third Street and went a bit south from there to the lake. It was surprisingly not windy or cold at the water.

It was a really beautiful afternoon for a walk. I was a little hot and wished I had brought a sweater instead of a jacket. Anyway, from there we went North up Royal York all the way to Bloor, where we caught the subway. It was a long walk from Lake Shore to the Gardiner but didn't really seem as long from Gardiner to Bloor.