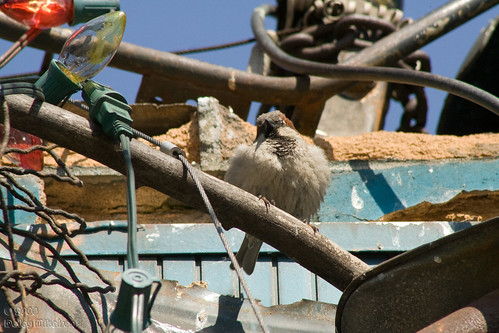 The rest of the day, we walked around town. This bird was on Queen West up on a storefront piece d'art.

After visiting some fabric stores along Queen West, and passing and greeting my uncle at Ossington, we had lunch at Cinnamon Girls. The food was really tasty. We were happy not to have stopped earlier. Though, we had thought they were only open Monday to Friday, but were pleasantly surprised.

Another stop at a fabric store and a computer store, led us to take the subway to take a ride on the Scarborough RT. Let me tell you it is nothing to bother going to ride. The trains are small and noisy. I have read people call it a "toy train" and now I know why. Following this, we took a bus ride along Eglinton, which may have been faster than taking a combination of subways to the same place.

It was a long day.