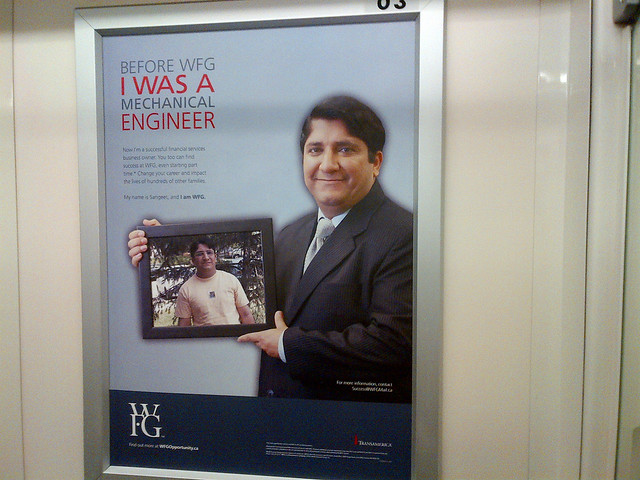 This strange ad was staring at me on the subway a couple of weekends ago in Toronto. The ad’s copy reads:

Before WFG I was a mechanical engineer

Now I’m a successful financial services business owner. You too can find success at WFG, even starting part time.* Change your career and impact the lives of hundreds of other families.

My name is Sangeer, and I am WFG.

It makes me wonder if there are a large number of discontent mechanical engineers itching for something new to do. Or, perhaps, it just happens to be the case that he used to be a mechanical engineer. I think the implication of the ad is that he was not a successful mechanical engineer, so I suppose they want you to think the stereotypical “engineers are good at math and finance involves math so they should switch over”. Of course, I know of plenty of engineers who never enjoyed math and found the courses offered little obvious benefit.

Later in the engineering education cycle, all those concepts you were supposed to learn in those math courses because obviously applicable, but it is often too late to play catch up.

The aside about math education in engineering is not really important to my thoughts that the ad is strange. I have never before seen any ads from WFG, so maybe there is a series of these that pick from various other vocations and professions and turn them into “successful financial services business owner[s]”.

What do you think?