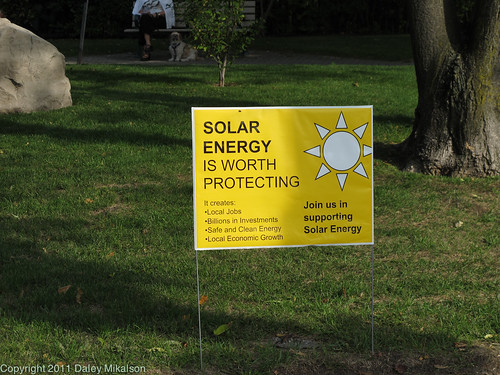 It's encouraging you not to vote for a provincial party that has vowed to end the Feed-In Tariff, which as (as it did in Germany) brought a lot of solar PV online.

While I can agree that throwing out wholesale the Green Energy Act is a poor approach, I feel the sign makers might have been a bit more explicit on the sign and perhaps could have a website.

If we look at the things that solar energy is supposed to create, there are some problems with them from a sound economics standpoint.

First, it says solar energy creates local jobs. I'm not sure what it means for sure, but I'm going to guess they mean manufacturing jobs because Ontario political circles have an obsession with that particular type of jobs. The desire to have things built-in Ontario is something that I still do not understand, and makes me think of this story from the Economist about protectionism in Argentina. It is nice to have blue-collar jobs in factories making things and I am fairly certain Ontario can do that well in industries where we have a competitive advantage. I am not convinced that solar energy is such an industry.

One indication that it may not be Ontario's industry is the massive feed in tariff rate that solar power gets (between 44.3 and 80.2 cents/kWh depending on the installation). The solar rates are double any other feed-in-tariff rates for the regular program and quadruple for the microFIT program (source PDF, 3 June 2011). These prices are 10 to 20 times the Average Weighted Wholesale Power Prices for the month of September and 2011 to date as reported by the Independent Electricity System Operator (scroll to the 3rd graph). Other forms of renewable are only 3 to 4 times the average weighted rates.

The second point is that solar energy creates billions in investment. I assume this claim stems from the government press release about the Samsung deal. It is hard to argue about what might have happened without that deal and what level of investment would have occurred, so I won't.

Third, they claim solar energy is safe and clean. This is true if we look at when the energy is produced and used, but looking at the entire life of the photovoltaic panels may show a different situation. There are many many studies out there and that can be up to you to judge, if you see fit.

Fourth, they say that it creates local economic growth. I am not sure how this differs from local jobs of the first point and billions in investment of the second point.

Ultimately, it seems that while solar energy is a good idea and should be pursued where it is economically feasible that does not mean that we as provincial tax-payers should be subsidizing it. Where solar is economically feasible is in many more situations than the negative side of the debate would have you believe, but a subsidy as substantial as the FIT and microFIT programs skews the uptake of this particular form of renewable.

I see the sentiment behind the signs as being we support "green" things because who doesn't these days and we do not like paying the full price for anything. Renewable energy installations are expensive, but I am still not sure that collectively we should be paying for the enrichment of the few who have the means to install their very own renewable cash cow.