Skating on a Path

Yesterday, Heather and I took in the new (-ish) skating path in Colonel Samuel Smith Park, just south of Lakeshore at the end of Kipling. It was a clear, sunny day and was just below zero. Our bus from Kipling was evenly coated with dirt and thus the windows were opaque.

The park was quite snowy, as one would expect after the past few weeks. There is a building beside the rink where you can put on your skates and store your boots. It is heated and there are even washrooms. The photo below is taken from the southern end of the path looking north to the building.

It wasn't very busy when we were skating. Just a few families and some couples, of which about a third seemed to unsure on their skates. The path is wide enough to pass slower skaters without causing them to fall. 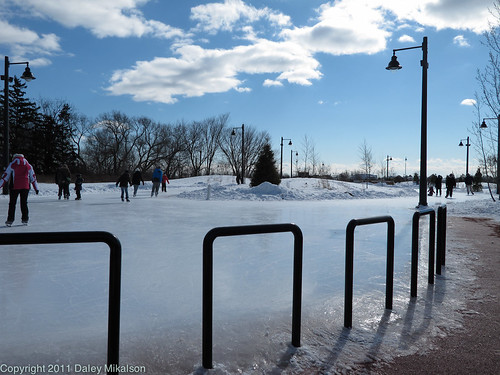 We took a break before doing a couple more go-rounds. This photo is from one of the many benches at the north end near the building. There is a rubberized surface to protect your skate blades and a rubber path to the building.

It was not too windy, but there were some gusts that indicate it would be a lot of work to skate in sustained winds. It would also be quite cold with sustained winds. The ice path is an interesting idea and a fun adventure.

Afterward, we had a tasty lunch at Mitzi's Sister before visiting a couple of stores on King street before heading home.